The Jewish presence in Seville occurred when a large number of Jews were welcomed buy the Muslim ruler after the city of Jerusalem had fallen into the hands of Muslims, therefore the Jewish population had to spread to more favorable locations. The Jewish population received privileges and gained prominent positions in society. They became tax collectors, doctors, diplomats and much more. The Jews were allocated their own part of the city today known as Santa Cruz, which was also considered the center for Jewish affairs, both religious and commerce. 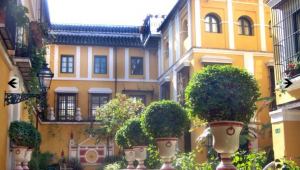 In the old days Santa Cruz was surrounded by a wall, and was sometimes referred to as the ghetto, from time to time the Jewish population has been under threat from the Christian population, but they have managed to survive.

Today it is considered one of the most important places for tourism in Seville, just few minutes away from the cathedral, it is perfectly located in the historic centre of Seville and the hotel Las Casas de las Judería offers the perfect accommodations for a stay in Seville.