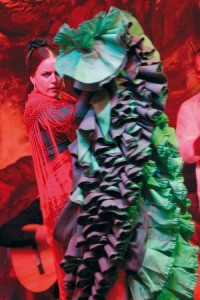 The Sevillana is a typial dance of the city of Seville composed of triple rhythm, with rapid sequences and songs, often accompanied by castanets.

It’s danced mainly during parties of “Feria de Abril”, which takes place every year where you can see thousands of people in traditional dresses who go to a special district which hosts festivals and parades of horses and carriages.
The typical places where you dance Sevillanas are called “rociera rooms” and those can be found all over Spain, but especially in Seville.

The Sevillana is essential for the formation of those who want to deepen and enrich their culture of flamenco. The Sevillanas despite being a popular dance, have had a strong influence from Flamenco, that was born and developed in Andalusia and particularly in the geographical triangle between the provinces of Seville, Cadiz and Cordoba, the areas where there is, traditionally, the highest density of gypsy population.

One of the most popular room of Sevillana is “El Tablao Flamenco Los Gallos” that, since 1966, date of its inauguration, has been in the flemish elite thanks to a fantastic famous artists who night after night, perform a great show of singing, dancing and guitar playing flamenco.
Through its 45 years of existence Tablao Los Gallos is considered as the oldest Seville’s “rociera room”. In fact El Tablao Flamenco is established as one of the main attractions in the city of Seville and because of this it’s recognized and respected internationally.